Antoni Tàpies
Timothy Taylor is delighted to present a solo exhibition of paintings and works on paper by Antoni Tàpies (1923-2012) in honour of the late Catalan artist’s 100th birthday. The works, dating from 1989 to 2008, express spiritual decay and rebirth in blackened paintings that reveal the eternal. The exhibition is curated by Natasha Hébert, the artist’s daughter-in-law.

Stony canvases like thousand-year-old mountains, ragged graffiti, and archaic symbols evoking the mysterious marks of a lost ancient tribe establish Tàpies’s ferocious contributions to post-war abstraction. Prefiguring the work of Arte Povera by decades, Tàpies found meaning in the humblest grains of sand, ‘the salt of the earth’, in rough-hewn paintings that illuminate the origins of life and death in a time in which religion had lost its resonance and violence cruelly divided the European continent. Tàpies’s paintings speak poignantly to our own uneasy present under a splintered global order, and remain a powerful influence on later artists who sought to embody the spiritual emptiness unleashed by the post-war period, such as Jannis Kounellis, Anselm Kiefer, and Julian Schnabel. 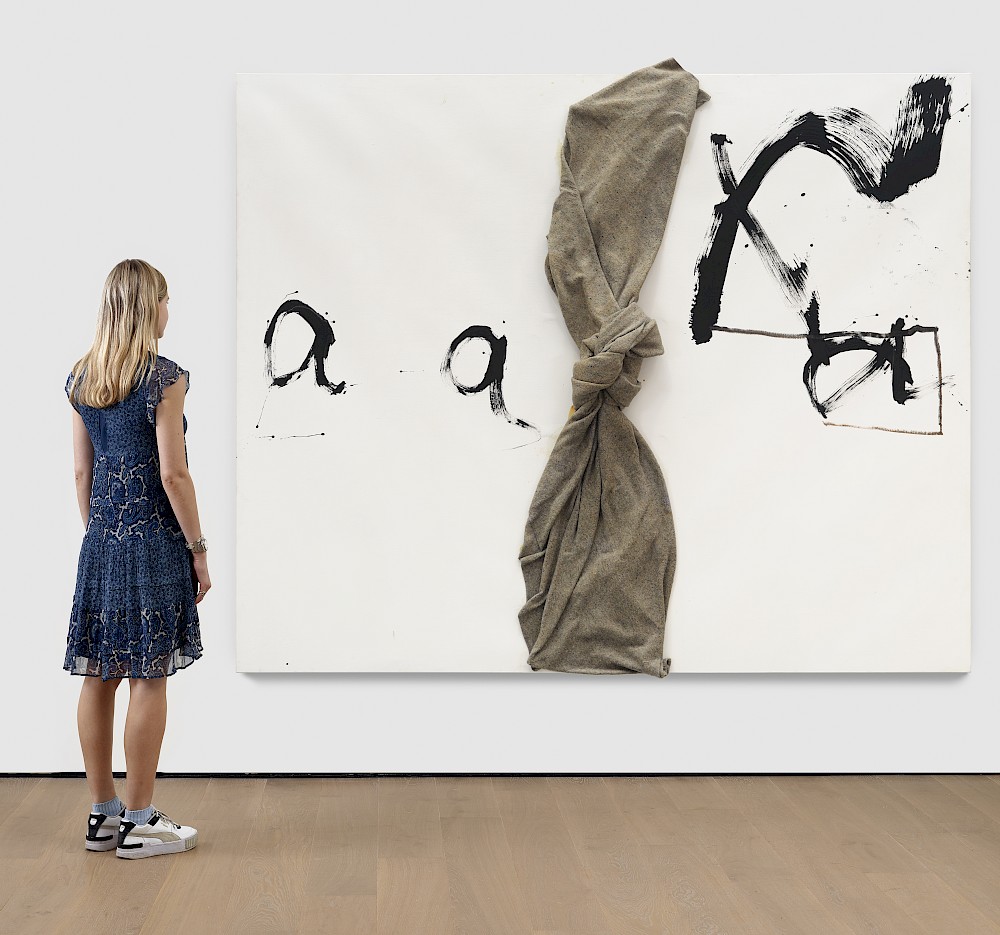 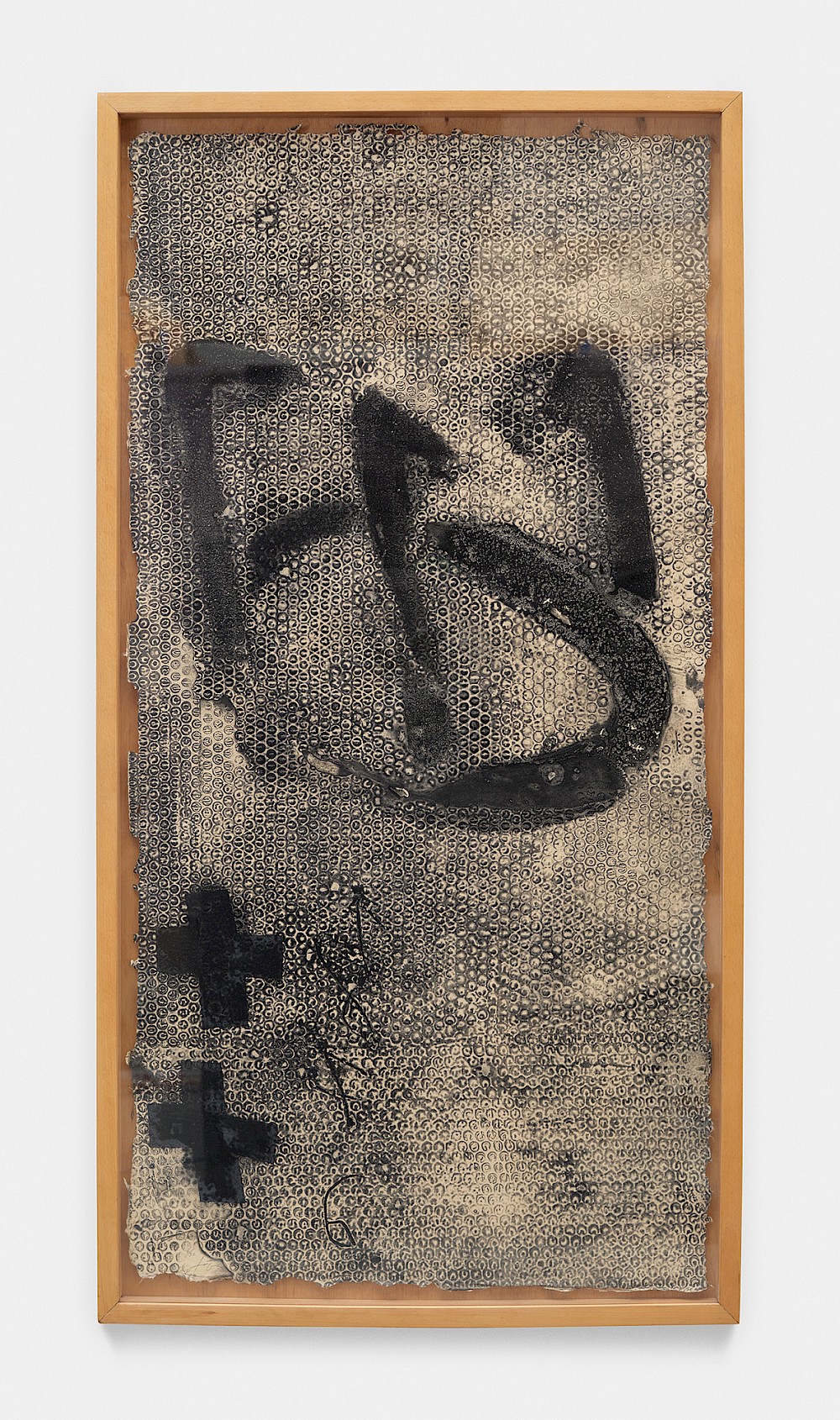 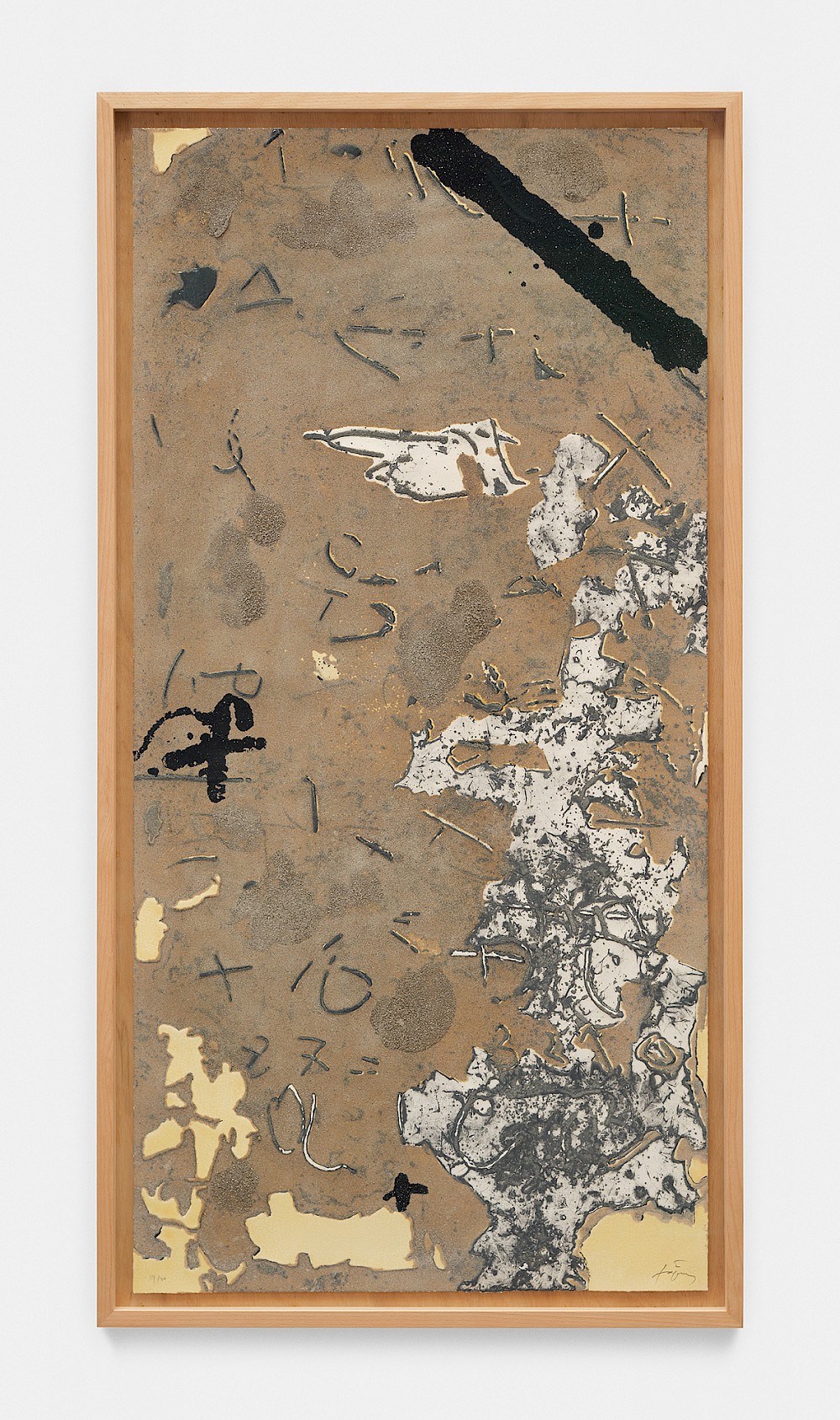 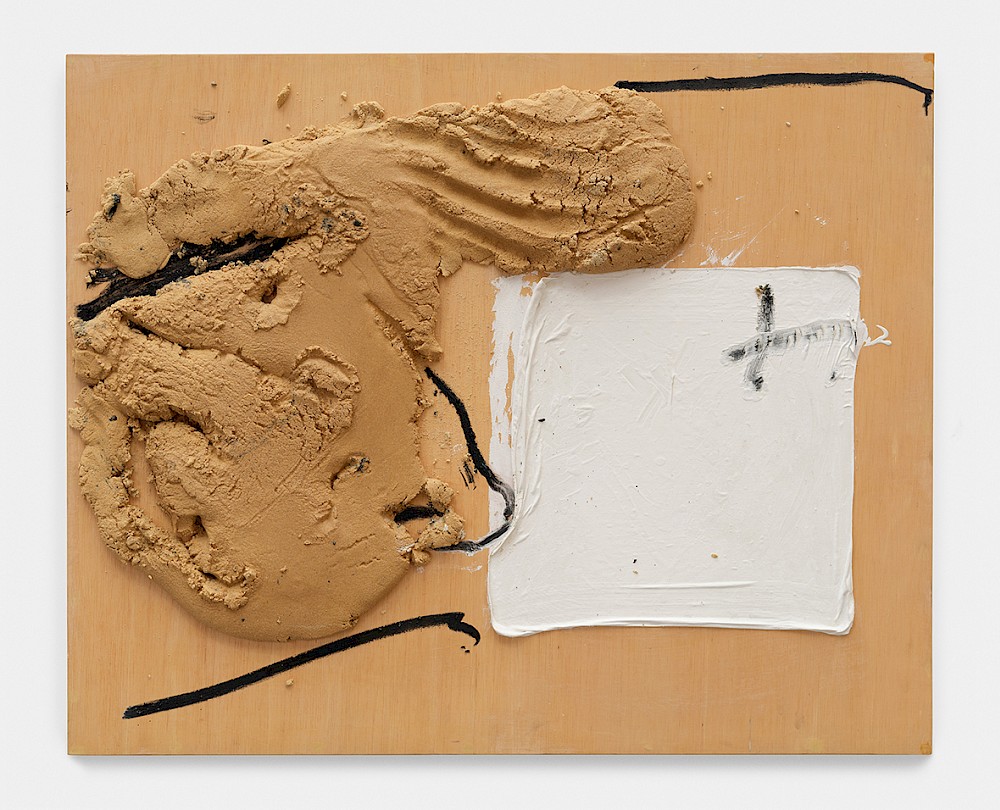 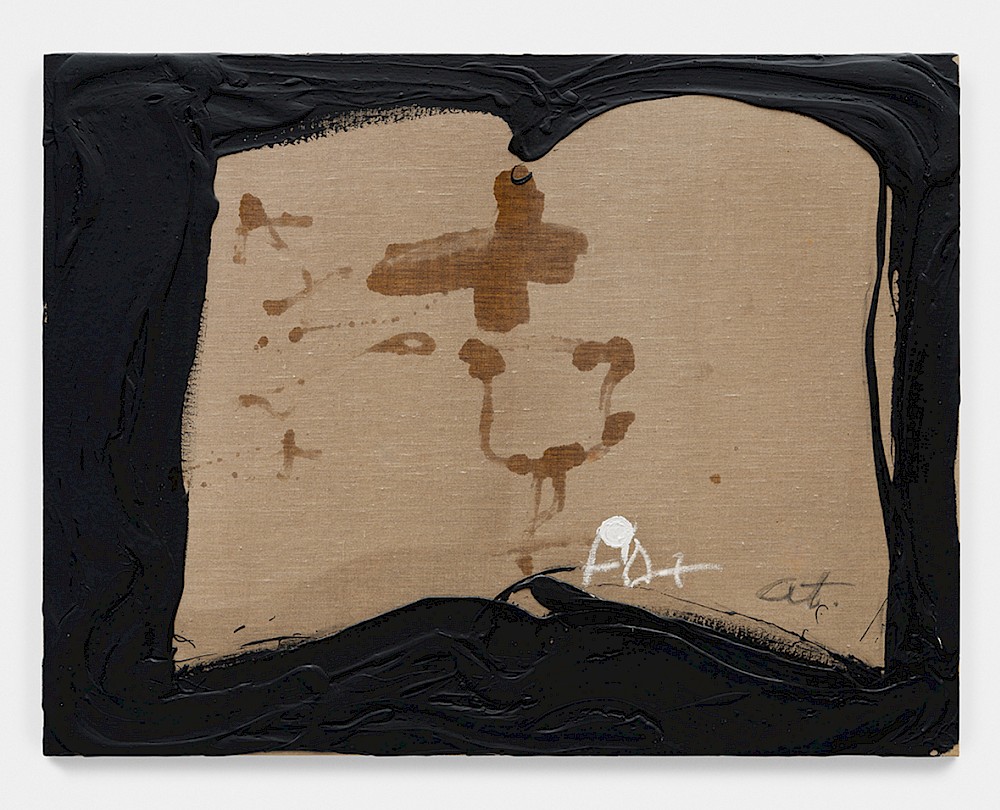 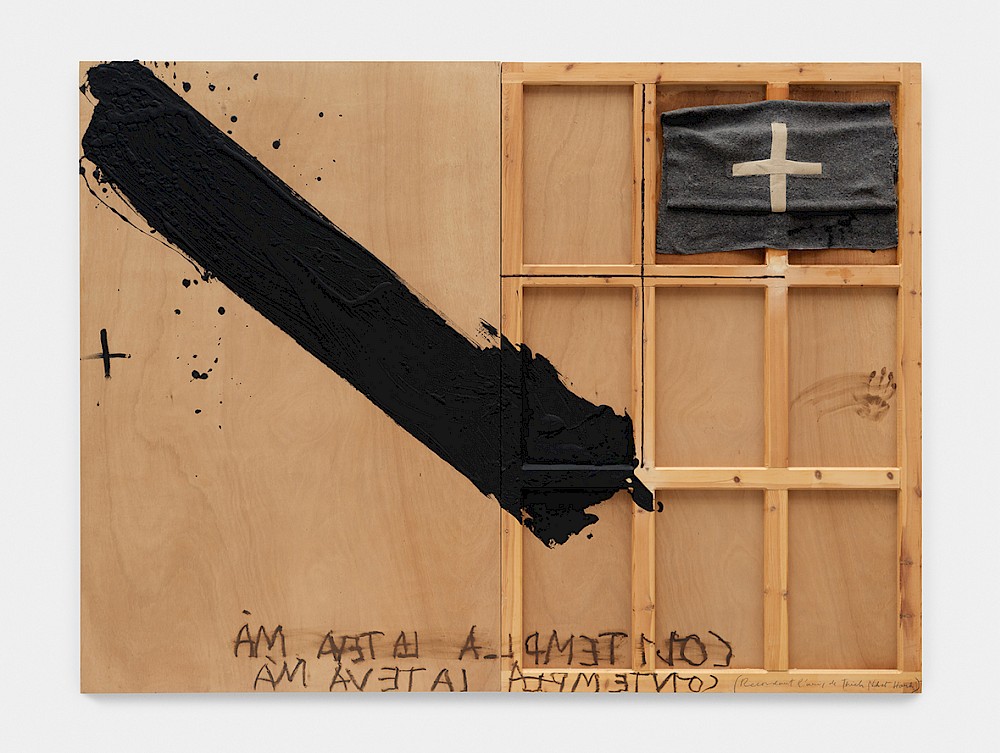 The late works in this exhibition sees Tàpies return to the essential language of crosses, triangles, open books and wall-like canvases that forged his career in the mid-1950s, after a brief period as a Surrealist with a mutually influential friendship with Joan Miró. Granular materials such as mud and sand refer not only to knowledge erased by history or not fully understood, but also Tàpies’ passionate belief in the working class: The oppression of the Catalan people under Franco simmers beneath the surface. In Ona-Mar (2006), an etched silkscreen resembles a newspaper scribbled with codes, suggesting a world of hidden protest – repressed, clandestine, but full of life. 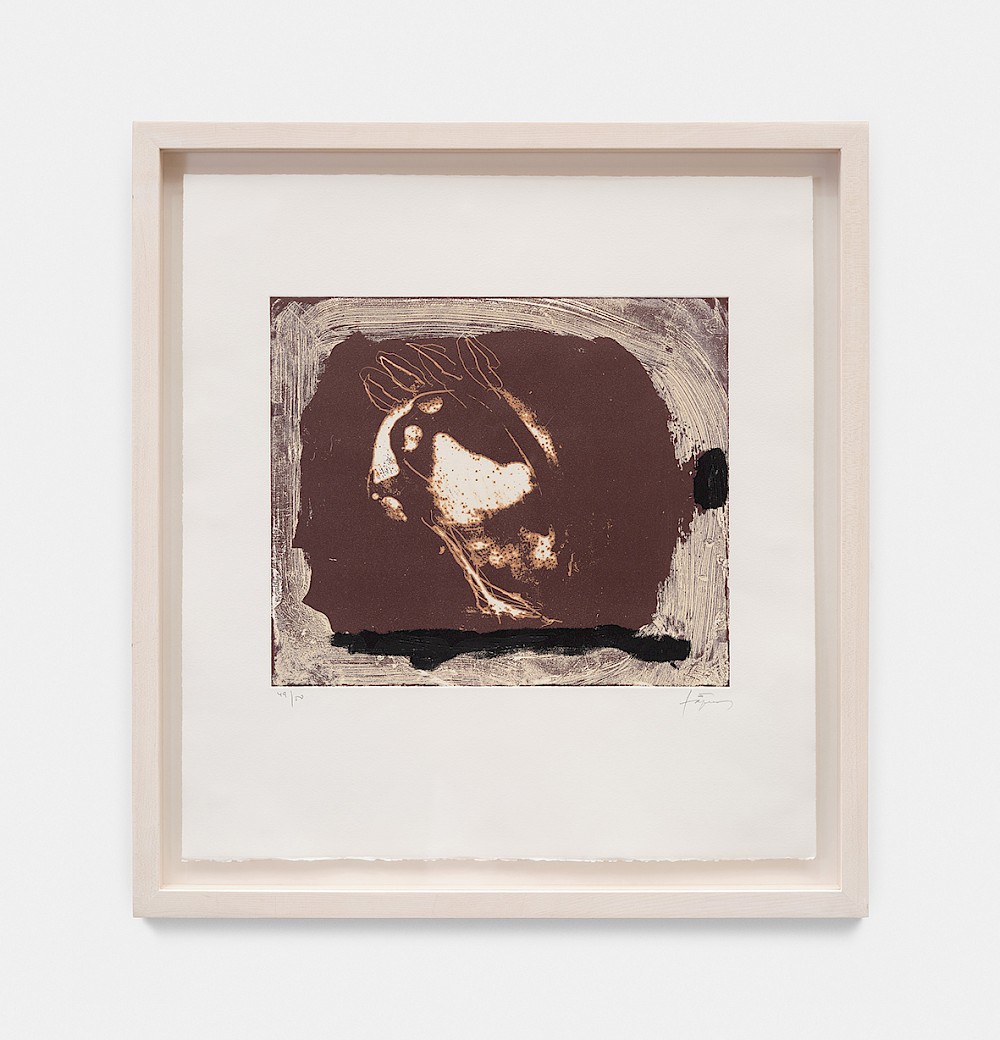 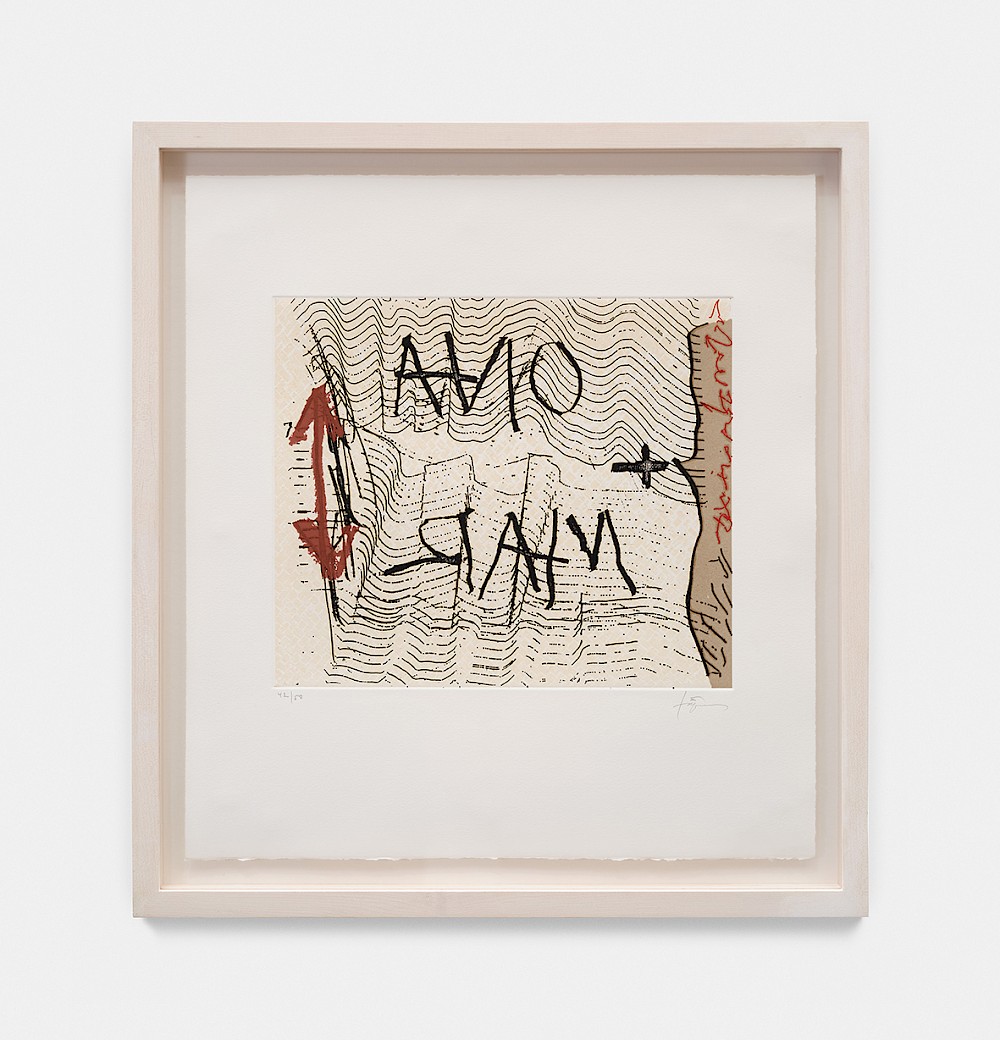 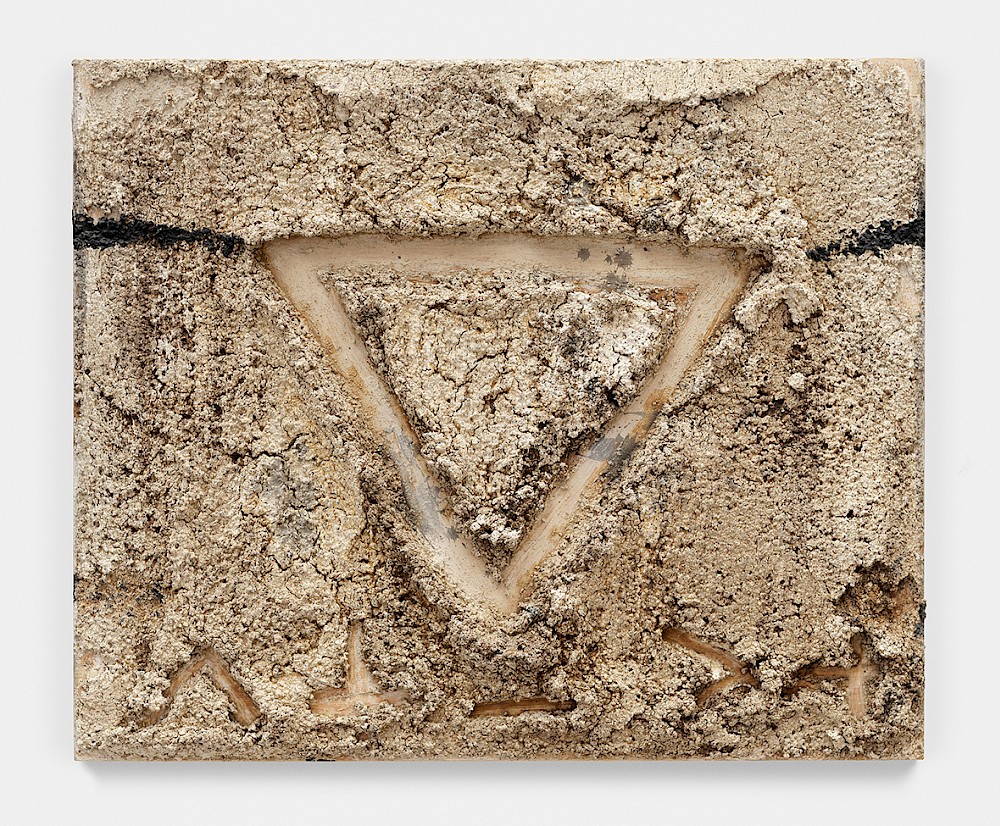 Borders and closed-off spaces signal the horizon of heaven and earth, the limits to our knowledge: In Matriu(1991), the cross symbol submerges a white canvas in graffiti spray-like black paint; the cross also appears in Quatre Parts (2008), in which black and gold squares divide the canvas into four parts. In a rare insight into his belief in the sacred image, he wrote: ‘A painting is a door that leads to another door. Art, no matter how excellent, will always be just one more manifestation of maya, of the deception at the core of everything. And the truth we seek will never be found in a painting, but will only appear behind the last door that the observer learns to open with his own strength.’

The eternal, the artist hints, lies in a blade of grass or speck of earth, more infinite than a human life. But the greatest mysteries in his work can only be apprehended indistinctly, from a distance, with a power that lies in the heart of the observer. 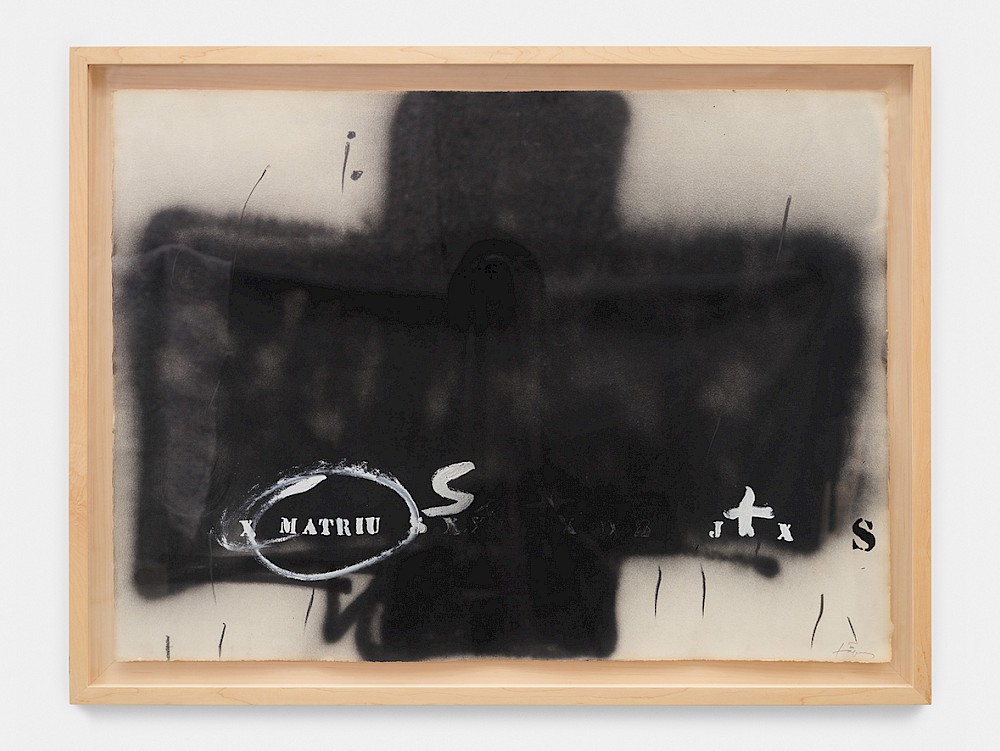 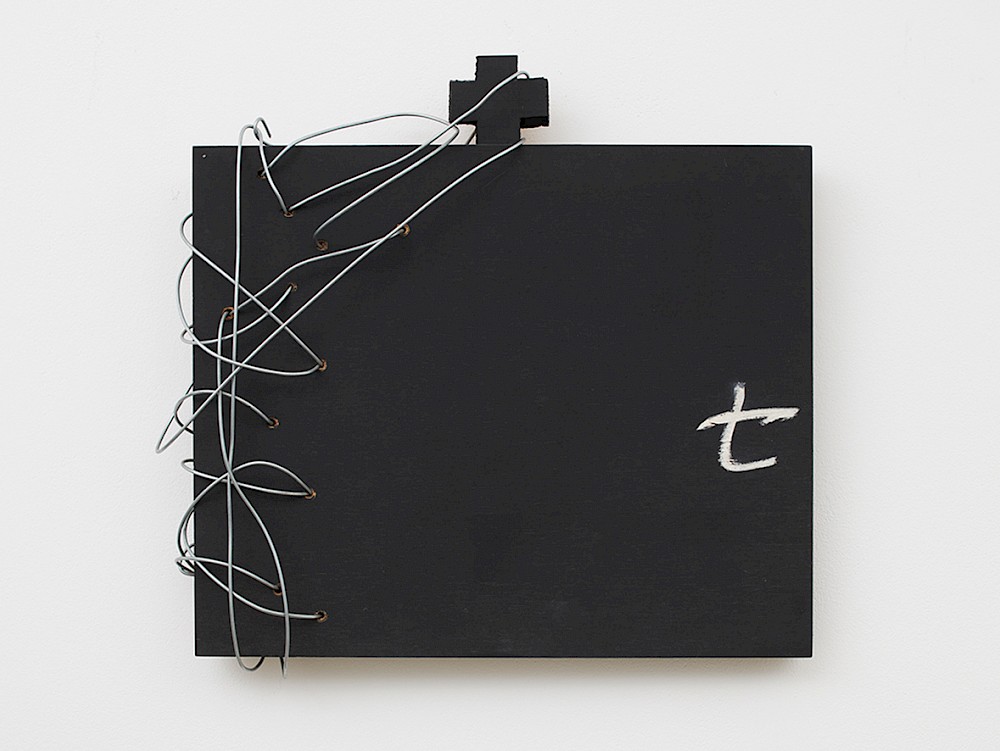 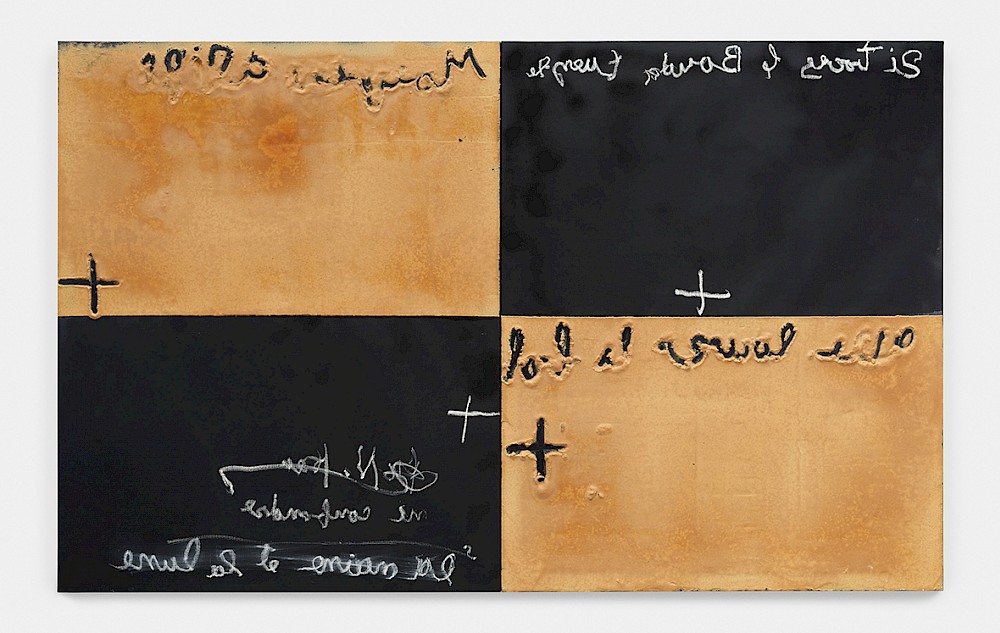 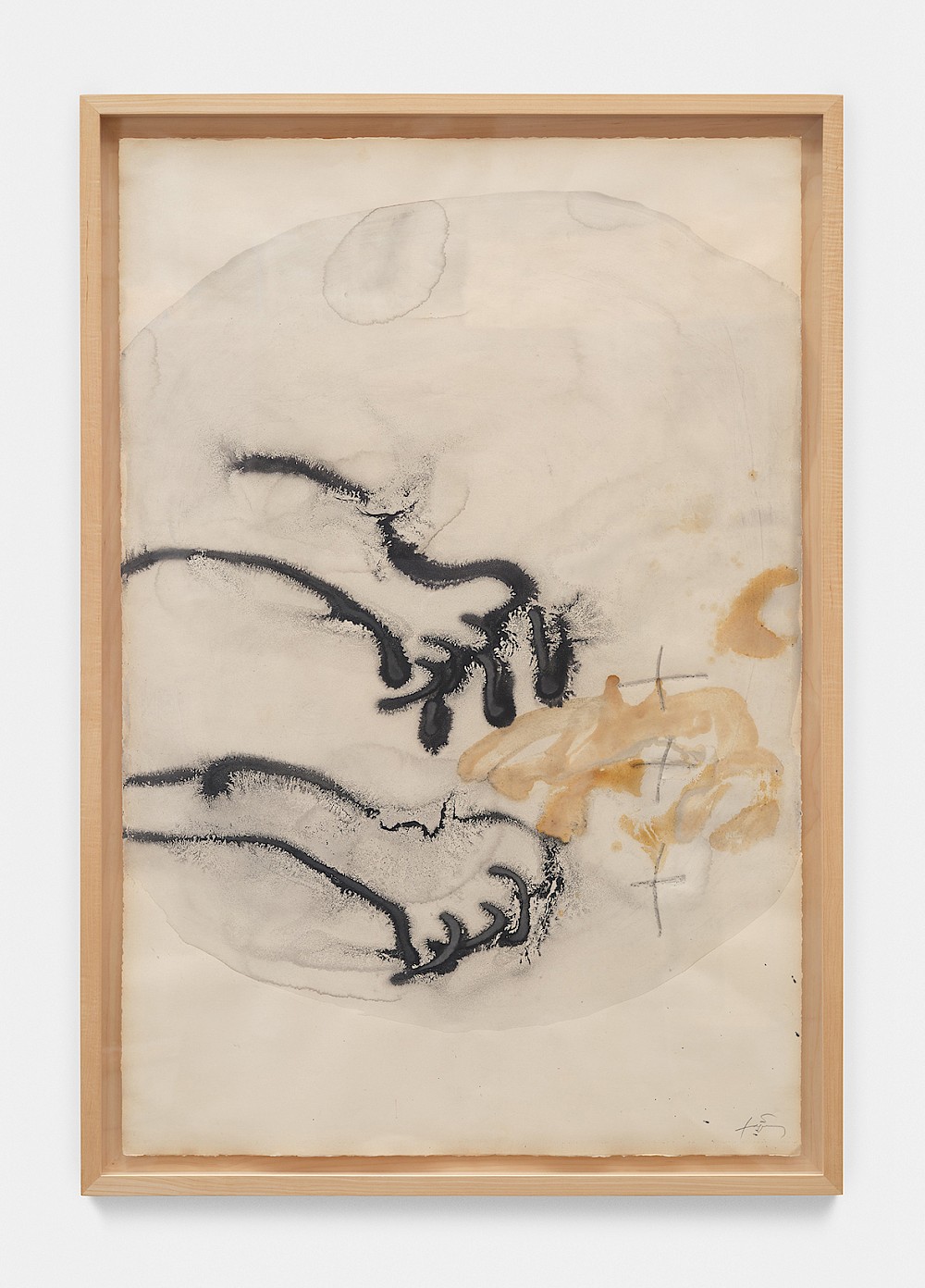 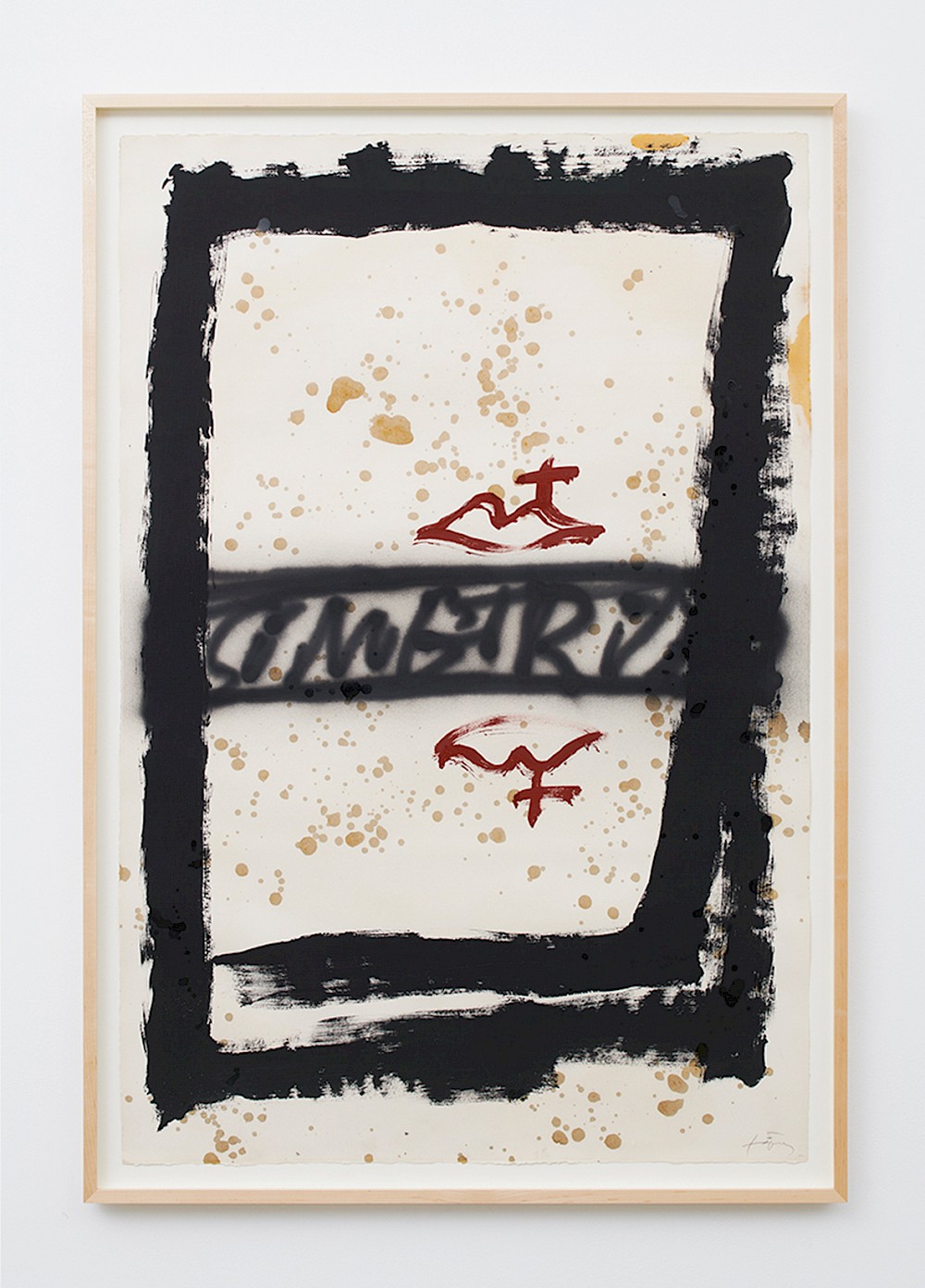 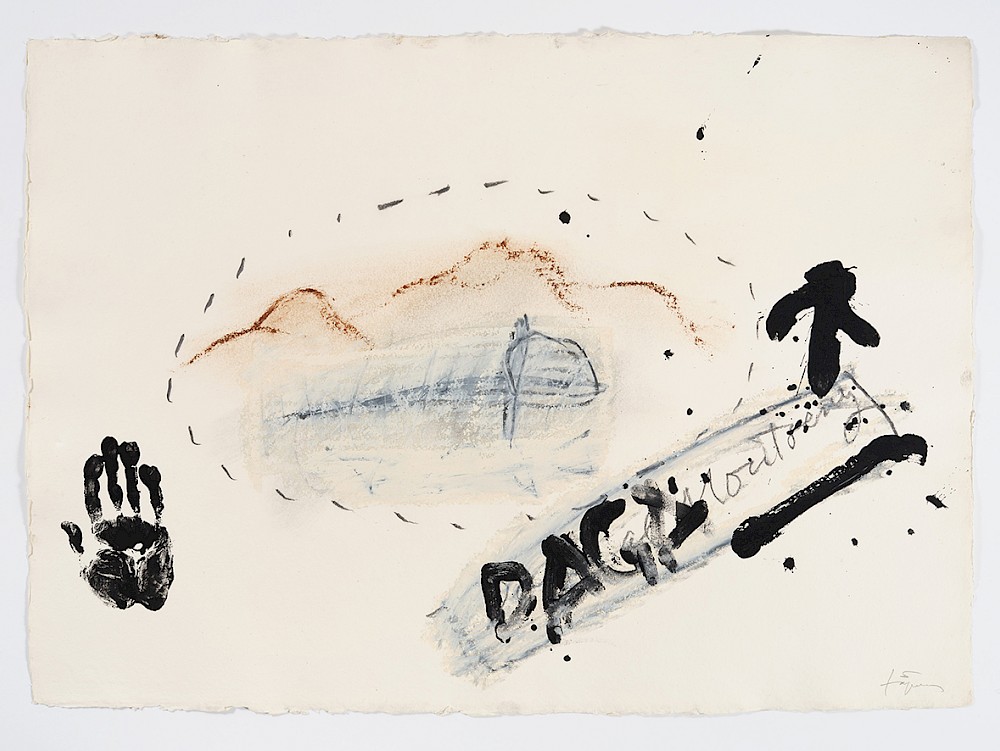 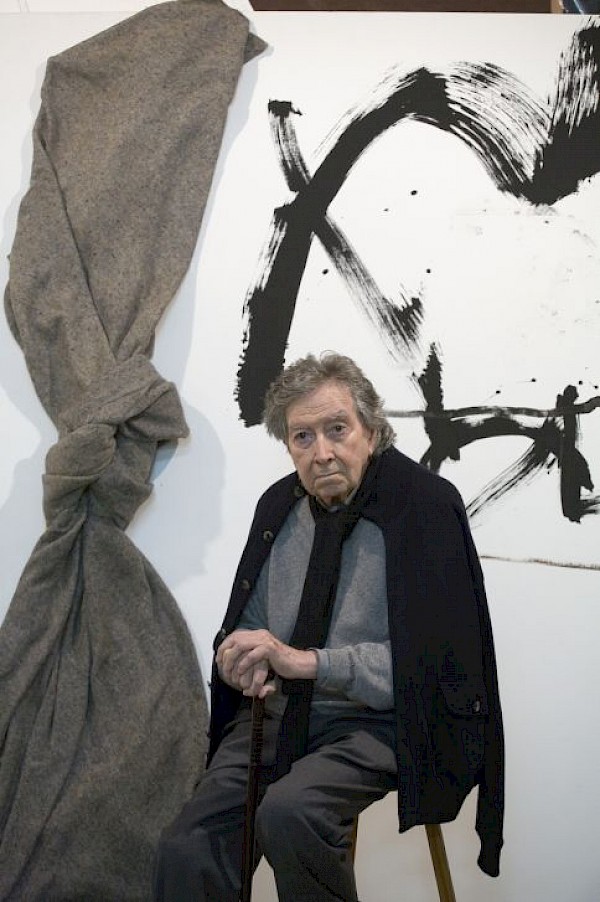 Born in Barcelona in 1923, Antoni Tàpies Puig grew up in Barcelona. One of the founding members of Spanish Surrealism, he became friends with Joan Miró, and came to prominence in the late 1940s with richly symbolic paintings influenced by French Surrealism. Yet he abandoned this style in the mid-1950s for what would become his own distinct visual language: scratched, marked and gouged surfaces suggestive of ancient doorways and street graffiti. The dramatic sufferings of the post-war period ‘appeared to inscribe themselves on the walls around me,’ he told the French art critic Michel Tapié in 1969. In 1962 he was given his first solo exhibition at the Solomon R. Guggenheim Museum in New York, and was represented by the Martha Jackson gallery in New York, an intellectual peer to the Abstract Expressionists. His work prefigured the arte povera movement of the 1960s and 1970s, and in 1990 the Tàpies Foundation opened a museum and library dedicated to his works in Barcelona.

Works by Tàpies are represented in dozens of public and private collections worldwide, including the Tate Gallery, London; Museum of Modern Art, NY; the Galleria Nazionale d’Arte Moderna, Rome; the Musée d’Art Moderne and the Centre Georges Pompidou, Paris; the Stedelijk Museum, Amsterdam; and the Museum of Contemporary Art, Los Angeles, amongst others.