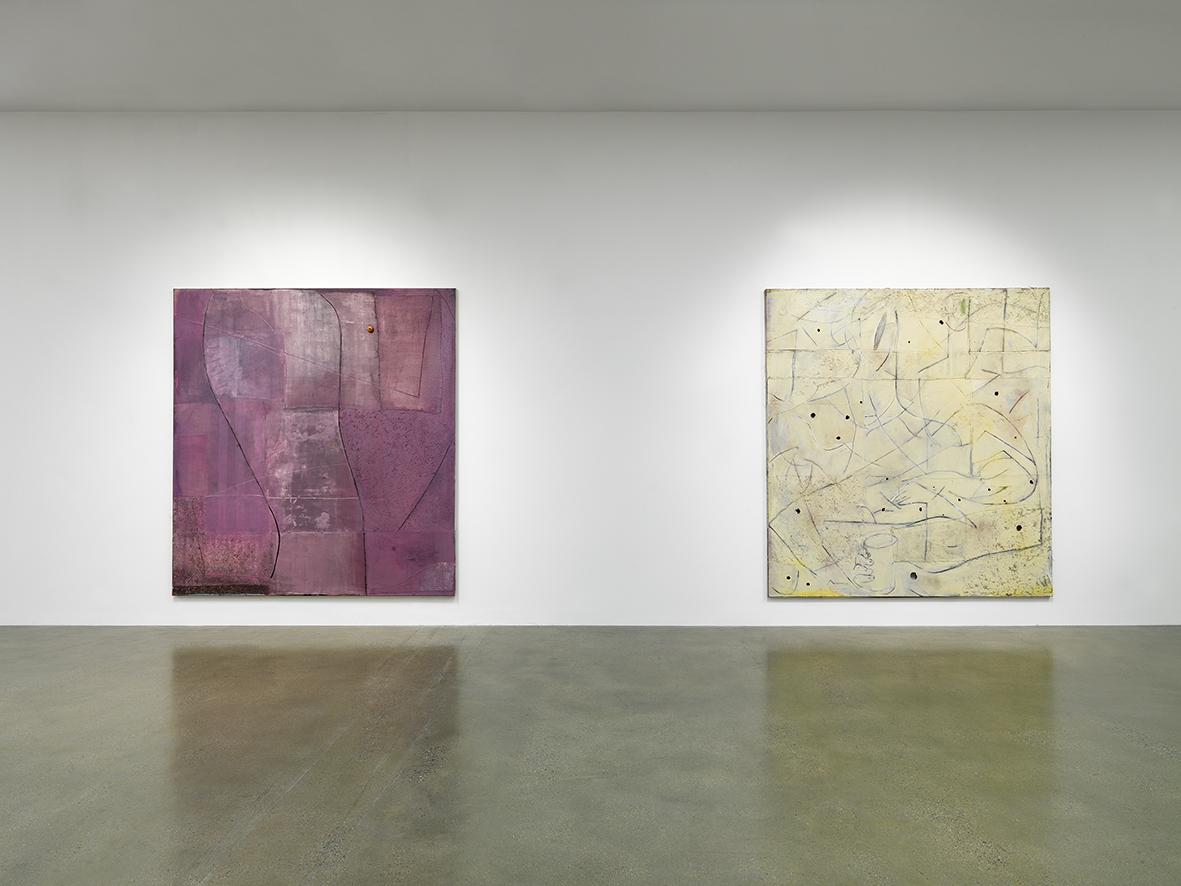 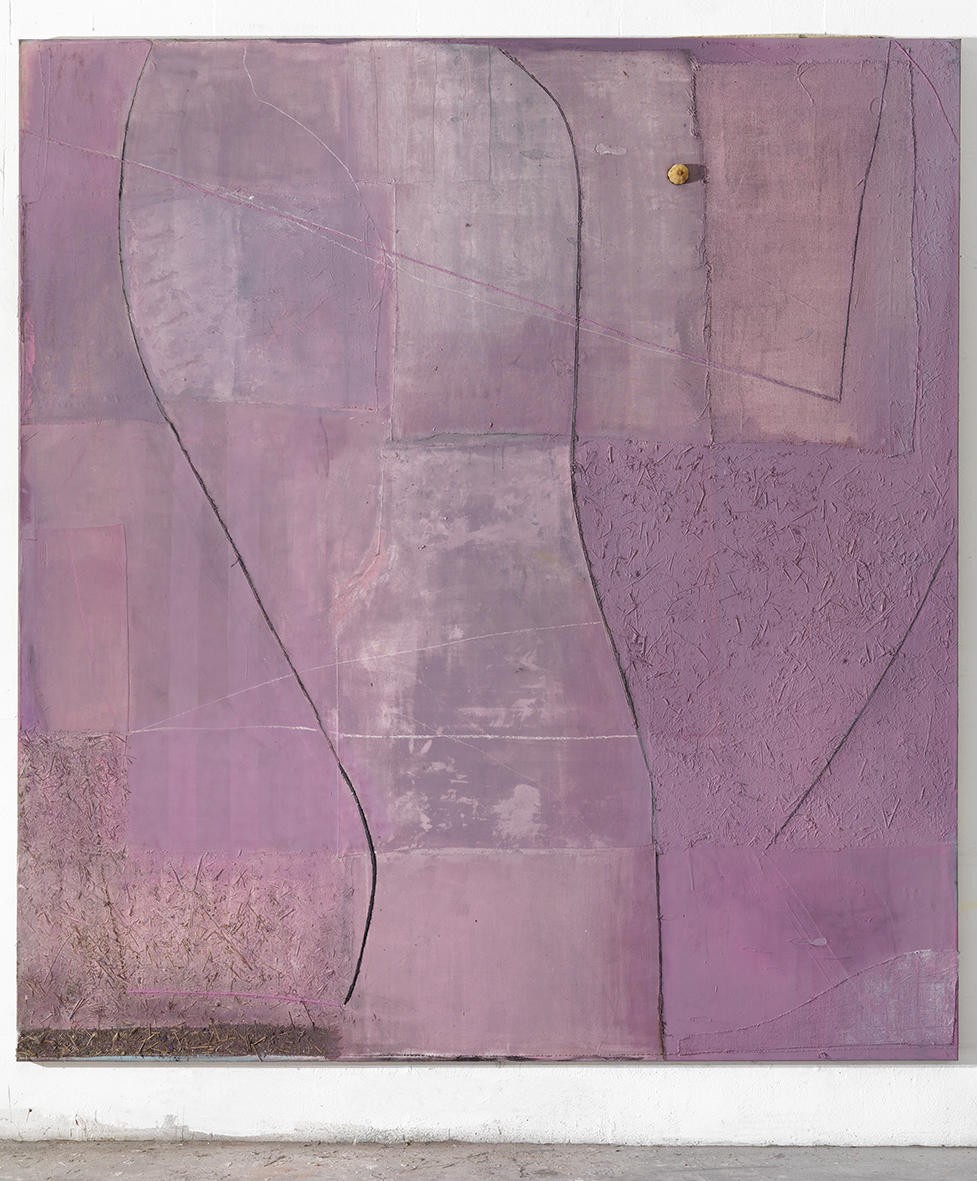 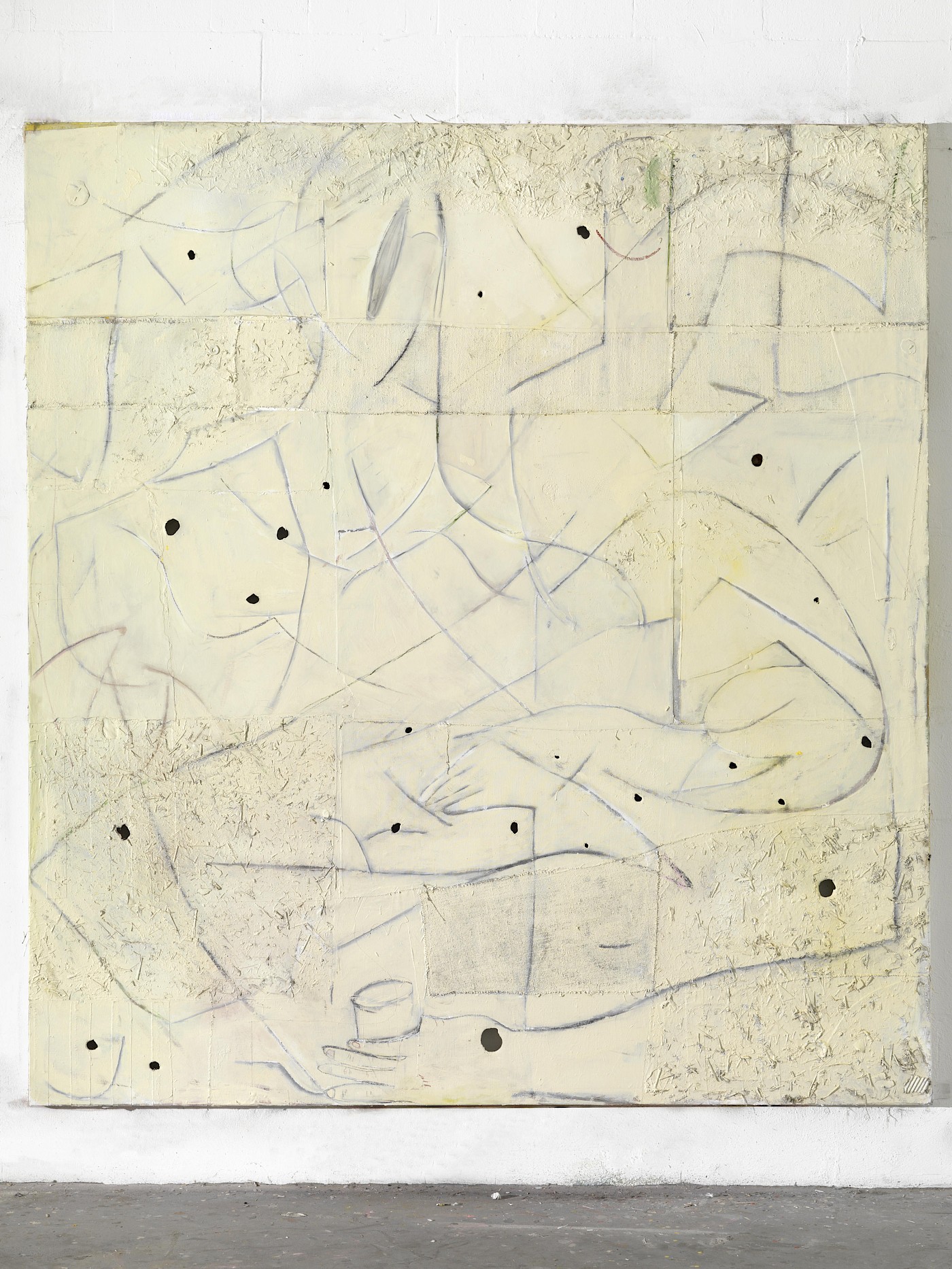 In this exhibition, the first by the artist dedicated exclusively to his paintings, Hüller has moved further from figuration towards the abstract – shifting panels of various materials are collaged together into disjointed, textured, densely layered webs. Sinuous lines arch over the canvases and abruptly rebound, seemingly indecipherable. These large-scale works are the distillation of Hüller’s exploration of collage where line plays a fundamental role. Created from lengths of material, oil paint and pencil, they demarcate the canvases and play with the paintings’ supposed authority. The smudges of under-drawings and the detritus from the studio are enmeshed in their painted surfaces revealing a process of continuous editing and revision. These ‘failures’ are neither hidden nor fetishized – they exist as relics of the process.

These works not only present a history of painting but also the history of their own creation. As Daniel Kunitz, editor of Modern Painters noted, Hüller is, ‘an artist in whose work the weight of the world is constantly felt.’ Reworking and reordering is left exposed – the canvases are pockmarked and scarred where alterations have been made. A silver work, Bellman’s, is composed of fragments of various materials, applied to the canvas with glue and staples to form a loose, layered grid structure. Fine lines dart over the metallic surface in puzzling trajectories – perhaps describing some hidden forms but remaining determinedly enigmatic. The oscillating hint of the figurative is a recurring element in these richly evocative works.

In Statler, rough sections of canvas have been put together, while other lines and marks etch the surface like a patchwork pavement. But these grey-scale paintings are not concerned with elegant line or subtle under-drawing, opting instead for a surface pitted and pockmarked with splatters of paint and the detritus and dust from the studio floor. Colour plays a minimal yet crucial role, as thin almost imperceptible washes of green, mustard or pink add subtle variations to the interlocking dynamic forms that dominate the surface.

The canvases flirt with the weighty appearance of heroic Modernist painting but are repeatedly undermined by a perverse friction. In Falscher Fünfziger, a liminal human presence, outstretched arms holding a glass and the suggestion of two reclining torsos, is hidden within a maelstrom of curves and patchwork panels, punctured by holes.

Roberta Smith writing in the New York Times, observed that, ‘the textured surfaces are highly reactive, changing as the light shifts, or as you move about. These works pile on the references — Yves Klein, Manzoni, Marca-Relli, Rauschenberg, Jasper Johns and even Julian Schnabel — but carry the weight.ʼ

Volker Hüller was born in 1976 in Forchheim, Germany and currently lives and works in Berlin. He studied under painter Professor Norbert Schwontkowski at the Academy of Fine Arts, Hamburg and was recently in residence at Steep Rock Arts in Connecticut, USA (2012). Hüllerʼs work has previously been featured at Timothy Taylor Gallery in a solo exhibition in 2010 and two group exhibitions in 2007 and 2009, both curated by Emma Dexter. He has had solo shows at Produzentegalerie, Hamburg (2009, 2012); Eleven Rivington, New York (2009, with Salon 94; 2011, and 2013); Grimm Fine Art, Amsterdam (2009, 2011); and group shows – Gesamtkunstwerk, New Art from Germany, Saatchi Gallery, London (2011); and the Falckenberg Collection, Hamburg (2010). A monograph co-published by Timothy Taylor Gallery, Eleven Rivington, Grimm Fine Art and Produzentengalerie in 2012 features texts by Margrit Brehm and Daniel Kunitz.