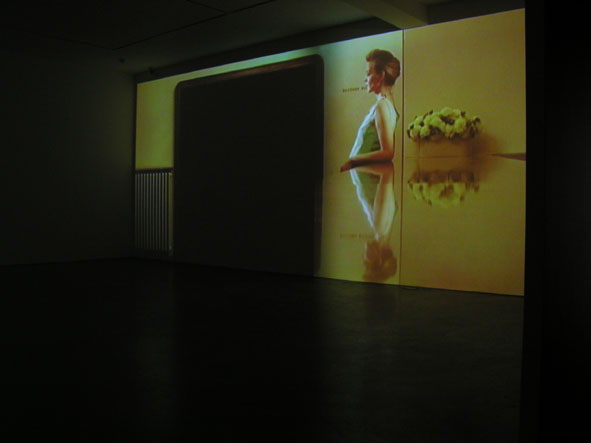 Inspired by the work of Antonioni, Mirror creates an atmospheric image of the 'in between', the nameless sphere between belonging and isolation. A woman, a man, guests at an evening party; a love affair evaporates. The images shift, objects and people disappear and recompose.

Frozen tableaux are animated by light alone. The light creates connections but also isolates the figures and separates them from the surrounding space. Like the axis of a mirror, the single image is separated into two halves. Mirror visualizes its characters' experience of decentralization and dislocation.

The single-channel projection Beacon similarly evokes the atmosphere of the ‘in between’ through a reverie on our romantic connotations of the sea: as container of history, exotic underworld, and means of escape or travel. Horizon lines of sky, sea, shore and coast become boundaries, and markers of a periphery.

Beacon is a montage of different locations by the sea, from places as diverse as the Phillipines and the Irish Sea. Combining travelogue footage and appropriated clips from feature films, the result is a single, imaginary locale.

In conjunction with our exhibition, Müller and Girardet will be in conversation with Ian White at Tate Modern on 7th May, for tickets please contact Tate Modern box office 020 7887 8888.

Matthias Müller (b. 1961, Bielefeld) has gained a reputation as Germany’s most talented maker of short films, with a substantial understanding of the materiality of film as an art medium. Müller’s passion for found footage, which he manipulates with virtuosity, has resulted in works such as Vacancy (1998) and Phantom (2001).

Christoph Girardet (b. 1966, Langenhagen) has a formidable reputation for working with found footage, often digitally editing single sequences or narrative elements into rhythmic loops. Emotion and perception are heightened, resulting in works such as No Forever (Golden) (1997) and Enlighten (2000).

Girardet has been exhibited in both solo and group exhibitions in major museums and institutions such as the Kunstverein Hannover, Germany; Stedelijk Van Abbemuseum, Eindhoven, The Netherlands; The Museum of Modern Art, Oxford, England; Kunstmuseum Wolfsburg, Germany; Kunsthalle Bielefeld, Germany, P.S.1, New York among others.
Mailing List
Enquire