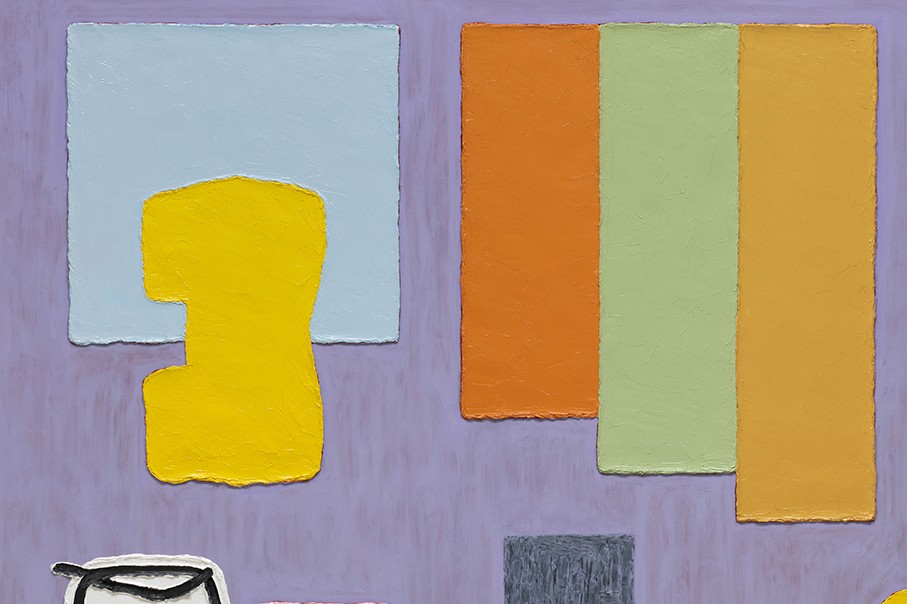 For the 2019 edition of Frieze London, Timothy Taylor is proud to present a series of new paintings by the New York-based artist, Jonathan Lasker.

Lasker’s painting process begins with intricately detailed ‘maquettes’ –studies which are then assiduously transposed on to larger-scale canvases. Flat slabs of thickened paint sit on the surface in forms varying from hard-edged rectangles to rounded, almost cranial shapes; forms which are distinctly his own and yet–at the same time–outwardly referential. The resulting pictures engage with a specific grammar, inviting the viewer into an arch guessing game.

In these new paintings, amongst the buried, cryptic forms unique to his practice, Lasker has added his own signature to the surface in a slow, thick black line–a further code of physical language superimposed on the surface. The forms interact with each other in various ways–often joining each other with a pleasing ‘jigsaw’ precision, while at other times they are intersected with other-wordly, densely scribbled lines. The foreground elements are placed against mottled background planes in unusual couplings of colour and texture.

The combination of contrary layers and motifs create opposing tensions between elements. In this way, Lasker masterfully presents multiple formal possibilities at once. The ‘building-block’ elements of each painting set the conditions for abstraction making the viewer acutely aware of the process of building a picture.

The relationships between figure, ground and line in Lasker’s works draw parallels with music as noted by the artist: “There is something that relates to a basic rock ’n’ roll or Jazz trio in these paintings. The three elements in my paintings—figure, ground and line—are almost like the three elements in a band, bass, drums and lead instrument. Those elements can take on different characteristics and say different things in conversation with one another.”

Timothy Taylor first showed Jonathan Lasker in 1998, and has since gone on to host several solo and group exhibitions over the past two decades. In this time, Lasker’s work has markedly influenced the vitality and validity of contemporary painting, and he is considered an important influence on younger generations of artists.

Born in Jersey City, New Jersey in 1948, he attended the School of Visual Arts in New York and CalArts in Valencia, California in the late 1970s.