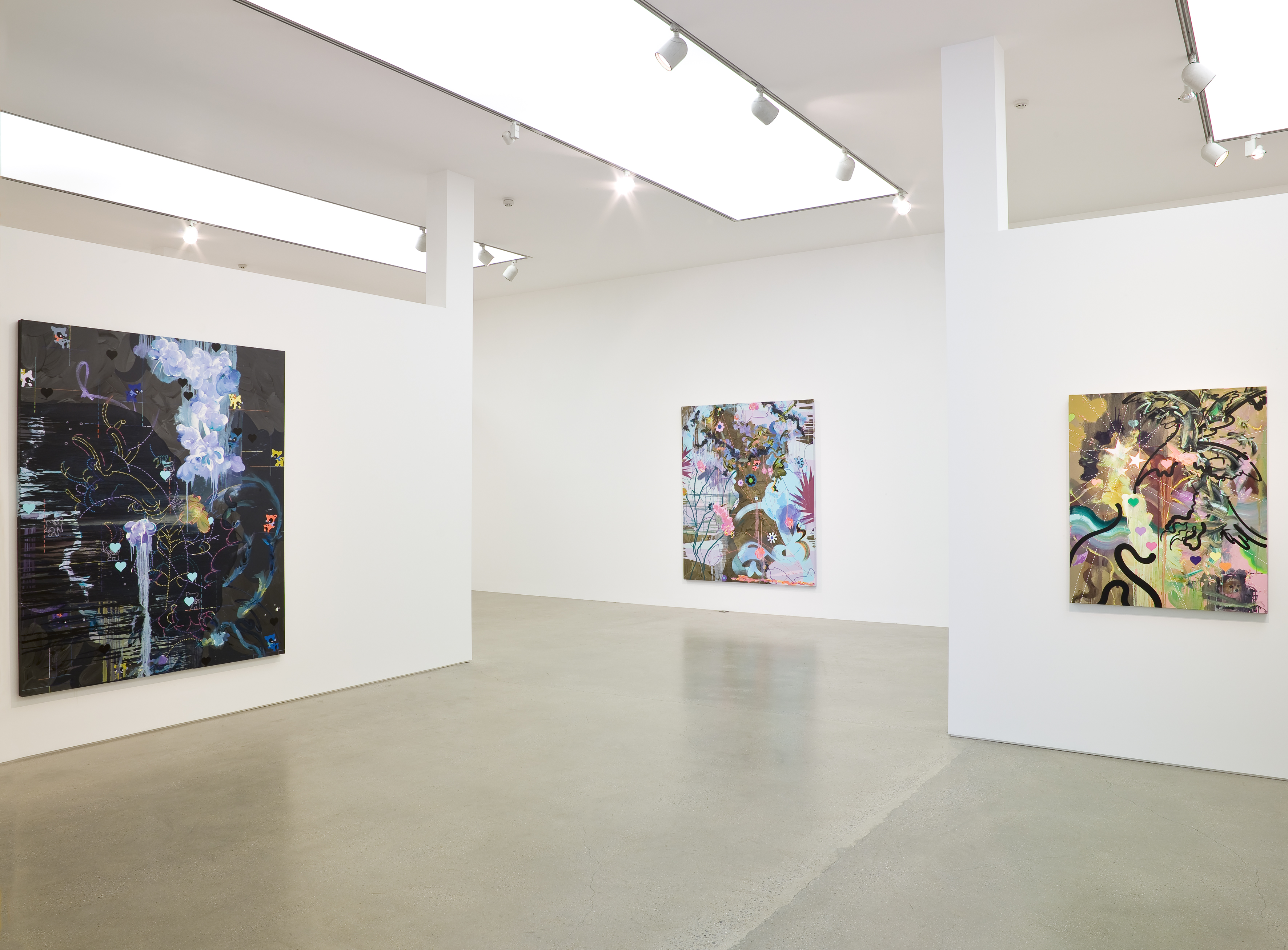 Timothy Taylor Gallery is delighted to present an exhibition of new paintings by Fiona Rae.

In this new body of work, Fiona Rae employs a battery of painterly marks and graphic signs that jostle for space on the fictive plane of painting. Rae revels in juxtaposing elements gleaned from a raid on art history’s store cupboard: layering Abstract Expressionism, Tachism and Minimalism alongside contemporary global references from graphic design and popular culture.

The mood is ambiguous – flowers, toys and cartoon characters initially suggest a sweet, almost cloying world, yet Rae’s dark and brooding palette combined with virtuoso washes and veils of paint suggest dissolution and decay – all is not well in this candied, melting world. These new paintings reveal Rae’s continued fascination with the graphic tropes of the Far East: a dragon’s scales, exotic feathers and flowers are all rendered with the humorous insouciance of Hokusai crossed with Asterix. Dark-edged, agile forms also predominate; snaking across the canvas in Pleasantly Happy, 2007, they insinuate and seduce – reminiscent of the limbless luxuriance of a Japanese erotic print, eventually sprouting suitably suggestive tufts of hair. In Chamber of Ten Thousand Flowers, 2007, dark lianas support a variety of life: painterly smudges, squiggles and clumps of paint suggest a myriad of exotic flora. This unsettling combination of sweet Eastern promise and bubble-gum neon Pop with something darker and threatening, reminiscent of the Northern European Apocalyptic tradition of Albrecht Dürer or Hieronymous Bosch, conjures a vision of an interweaved heavenly hell or hellish heaven – all the while demonstrating the pure joy of paint itself.

Rae wrote recently, ‘I love mixing it up. I don’t care where my bits of imagery, paint strokes or techniques come from – once I make them on the canvas, they’re mine and I own them. I am interested in having an ‘everything goes’ attitude to painting. I want it to be inclusive and democratic. Everything can have its say and its place. I can’t help but be a product of a globalised culture; I lived in Hong Kong, Indonesia and England as a child, with a British father and an Australian mother. Sometimes I don’t know which team to cheer on at the Olympics. But it’s a good thing really. I can take a Western sentimental version of a panda bear, a cartoon version of Chinese calligraphy, a window cleaner’s wipe-washing gesture, an Abstract Expressionist attitude to moving oil paint around, structure the whole thing around a self-conscious and ironic multi-coloured large-scale brushmark, give the painting a Japanese interpretation of an English sentence as a title, and…Look!!!…I have a strange picture of unexpected collisions and conversations which I dare hope provides a glimpse of a vivid and unsettling future world.’

Rae was born in Hong Kong in 1963, and completed a BA Hons Fine Art degree at Goldsmiths College in 1987. In 1988 she took part in Damien Hirst’s Freeze and shortly afterwards was included in Promises, promises, Serpentine Gallery, 1989; The British Art Show, Hayward Gallery, 1990, and Aperto, Venice Biennale, 1990. Within four years of graduating, she was shortlisted for the Turner Prize, Tate Gallery, 1991. Since then she has participated in many group exhibitions in museums, institutions and galleries worldwide, including: Unbound, Hayward Gallery, 1994;Nuevas Abstracciones, Museo Nacional Centro de Arte Reina Sofia, 1996; Sensation, Royal Academy of Arts, Hamburger Bahnhof, Brooklyn Museum, 1997-2000; Hybrids, Tate Liverpool, 2001; Painting Pictures, Kunstmuseum Wolfsburg, 2003; Pictograms, Kunstmuseum Stuttgart, 2006, and Fiction@Love, Shanghai Museum of Contemporary Art, 2006. Solo exhibitions have included Kunsthalle Basel, 1992; ICA London, 1993-94; Carré d’Art, Musée d’Art Contemporain, Nîmes, 2002, and You are the Young and the Hopeless, PaceWildenstein, New York, 2006. Rae’s work is represented in numerous public collections. She was elected to the Royal Academy of Arts in 2002 and appointed a Tate Artist Trustee in 2005.