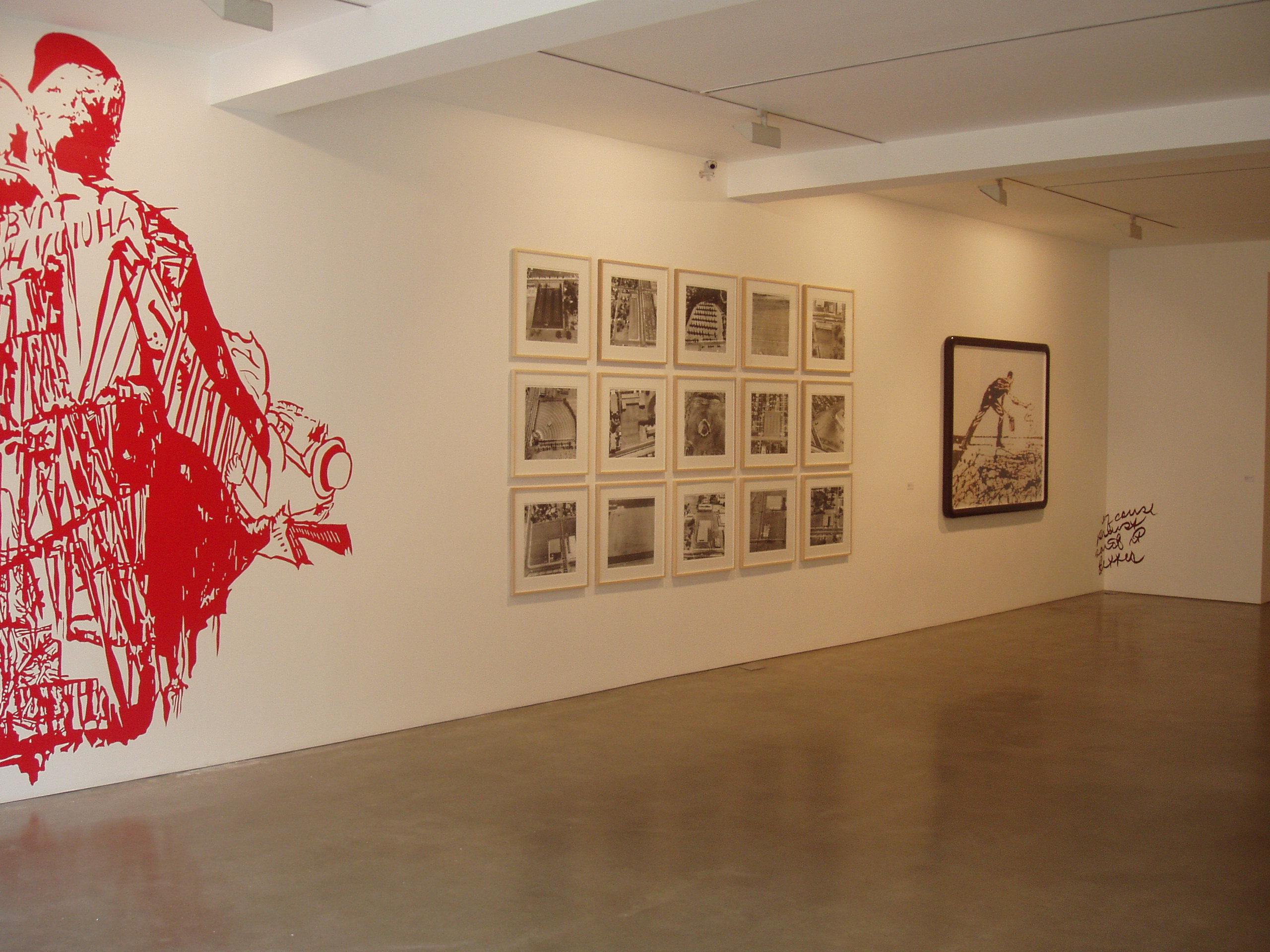 Francis Alÿs (b. Belgium, 1959)  In his series of painted diptychs, Alÿs begins by executing a small painting on canvas and then collaborates with a team of trained sign painters in Mexico City, where he currently lives. The sign painters make larger reworked copies of the original. Francis Alÿs’s initial quiet images of single figures engaged in strange solitary acts become brashly iconic as a result. The paintings become multiples; as such they directly implicate the truth of the image, which is undermined through the passage of time and author. Francis Alÿs has had numerous international solo and group Museum shows, including in 2004 the Baltimore Museum of Art; ‘Outlook’ in Athens; Guggenheim, Bilbao; MOMA, New York, Castello di Rivoli, Turin. Alÿs is represented by Lisson Gallery, London.

Tim Braden (b. UK, 1975)  Braden’s work is concerned with the evocations of place, alluded to by writers from Scott Fitzgerald to Haruki Murakami. Braden inserts a body of collective and personal memories into the landscapes of the novels he reads. The historical truth behind his images is irrelevant. His films relate to an initial building of an architectural model that claims to be nothing more than the fictitious and subjective; paintings are used to ‘complete’ elements of a suggested narrative

Tim Braden is an emerging artist, based in London, who has been exhibited in numerous project spaces, as well as in the Hamburger Bahnhof, Berlin; Sparwasser HQ, Berlin; De Parel Amsterdam Ibid Projects and Vilma Gold, London.


Gerard Byrne (b. Ireland, 1969)  In a sequence of photographs of the area around Loch Ness, the construction of this infamous lake as an idea in newspapers throughout the 20th century is discussed. What becomes apparent is the media’s construction of history versus reality. Seemingly mundane documentary photographs from the geographical area of Loch Ness are confused by the improbably differing dates of the images, and their captions from supposed eyewitness accounts of Nessie, the legendary Loch Ness Monster.
Gerard Byrne recently had a solo exhibition at the Frankfurter Kunstverein. Recent group exhibitions ‘This much is certain’ at the RCA, London, Irish Museum of Modern Art, and Royal Hibernian Academy, Dublin; Kiasma, Helsinki; Whitney Museum, New York; Istanbul Biennial, Manifesta 4, Frankfurt; CCA, Pittsburgh.

Cieslik (b. Germany, 1966) and Schenk (b. Germany 1967)  In their lambda prints of depict depoplulated urban spaces, Cieslik and Schenk initially appear directly influenced by photographers like Thomas Struth and Candida Höfer. However their work is entirely computer-generated; ‘painted’ on screen. Cieslik and Schenk studied painting at the Düsseldorf Akademie under Gerhard Richter. There is no attempt at truth in these images at all, they are the stage for a fiction that has already been played out by varying personality types: ordered, egocentric, spontaneous, competitive.
Cieslik and Schenk are emerging artists on the Dusseldorf art scene.

Santiago Cucullu (b. Argentina, 1969)  Cucullu’s large, site-specific wall paintings, made with brightly coloured contact paper, occupy a space between autobiographical reminiscence, fiction, and collective memories. Drawing from a wide range of references from Dostoyevsky to Led Zeppelin, he questions the possibility of painting history objectively. The starting point is the found image, or an idea from conversation, that Cucullu visually or conceptually fits together with some other idea or image. Cucullu has recently had a solo show at the Mori Art Museum, Tokyo; and has an upcoming exhibition at the UCLA Hammer Museum, California. Group exhibitions include the Whitney Biennial, New York; Walker Art Center, Minneapolis; Fondazione Sandretto de Rebaudengo, Turin; New Museum of Art, New York. He lives in Milwaukee.

Luisa Lambri (b. Italy, 1969)  Lambri’s photographs of homes by modernist architects such as Richard Neutra and Philip Johnson have a cool detachment that is illusory. What at first appears to be objective photography reverberates with the intensely personal. The protective skins of these important Modernist buildings are pierced by Lambri’s memories, emotions and intellect. The photographs become a study of self as much as of the memories of their architects; Lambri’s own emotions and imagination takes centre-stage.
Lambri has recently been the subject of a major solo show at The Menil Collection, Houston. Recent group shows include the 2003 Venice Biennale, and  ‘Living inside the grid, The New Museum of Art, New York. Lambri lives and works in London and Milan.

Vik Muniz (b. Brazil, 1961)  In his ‘Action Image’, 1997, Muniz has recreated with chocolate sauce a well-known photograph by Hans Namuth of Jackson Pollock in his studio. Muniz is literally painting with chocolate and his fast-action use of chocolate mirrors Pollock’s use of paint. Muniz uses photography to synthesize a creative process that is at once painterly, sculptural, and above all, concerned with illusion. His work draws attention to the technical and conceptual mechanisms behind image production, construction and reproduction, undermining photography as a “truth revealing” mechanism.
Vik Muniz has had numerous international solo and group Museum shows. Exhibitions in 2004 include a solo show at the Irish Museum of Modern Art, Dublin; and group shows at the Fundacion Telefonica, Madrid; The Brooklyn Museum of Contemporary Art; the Contemporary Museum, Baltimore.

Ed Ruscha (b. USA, 1937)  In both his paintings and photographs Ruscha maps space that is simultaneously documentary and fictional. Ruscha’s early use of photography, exemplified in the ‘Parking Lots’ photographs of the late 1960s, initially appears to be an objective record of technical data and closely affiliated with the work of the Bechers a decade later. However the clarity of Ruscha’s framing allows these real locations to float within the picture plane, idealised into the realm of make-believe. Ruscha consciously accelerates this process in his paintings. What is usually significant in a map of Los Angeles is omitted. What remains is not real space but a fictional metropolis reduced to the free association of names and shapes.
Ed Ruscha has recently been the subject of several major retrospectives at Museums such as J. Paul Getty Museum, Los Angeles; Hirshhorn Museum, Washington, D.C.; Museum of Contemporary Art, Chicago; Miami Art Museum, Miami; Modern Art Museum of Fort Worth, Texas; MOMA Oxford, Reina Sofia, Madrid; .Inverleith house, Edinurgh. In July 2004, The Whitney Museum, New York, opened a drawing retrospective which will travel to the Museum of Contemporary Art, Los Angeles.

Bettina von Zwehl (b. Germany, 1971)  In the ‘Rain’ series of portraits from 2003, von Zwehl references the cinematic use of the advent of rain to suggest a psychological turning-point. Although her photographic portraits are reached through a systematic means of observation that relates directly to the Becher tradition, the encounters that she sets up with her sitters are pre-arranged and theatrically contrived. In this real yet make-believe downpour, the psychological state of her sitters is both manufactured and documentary. The artist attempts to reveal a truth about her sitter that a more conventional sitting would inhibit, but is prepared to enter into an untruth to achieve that result. Recent group exhibitions include: ‘Imperfect Innocence’, Contemporary Museum Baltimore, Reality Check, a touring group exhibition by the British Council and Photographer’s Gallery, London; Contemporary Art Center, New Orleans; V&A, London.