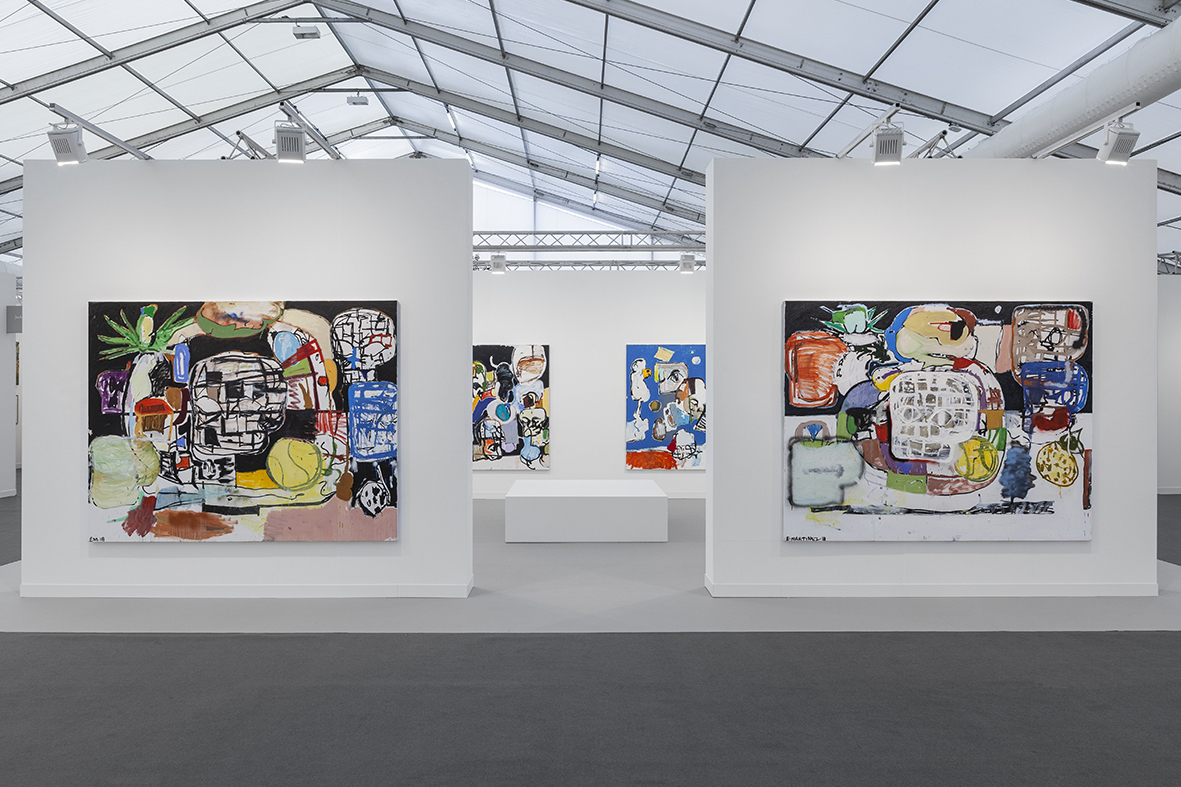 In these new paintings, transient forms are hard to pin down as they float in the picture plane or break down into abstract mark-making. Unfixed gestures intensify Martinez’s idiosyncratic line; moving from tennis ball to dinner plate to a gure’s head, with whiplash intensity. These components jostle for position, sometimes supported by a defining line across the bottom, perhaps suggesting the horizon, the edge of a frame, or maybe the edge of a dinner table; an underscoring of space.

Quotidian still-life detritus such as plants, dinner plates and fruits are juxtaposed with a more personal lexicon, masked heads, sunglasses and skulls, figures which have repeatedly cropped up in Martinez’s practice. These objects seem private and harder to reason with, projecting as part of an intimate belief system rendered in paint.

The paint boldly inhabits the surface in every way imaginable. Marks are made with slapstick application, impasto paint sits on a sunken thin wash, with the sputter of a sprayed line designating an amorphous shape or hastily filling it in. Overlapping planes of colour jut against a decisive silk-screened black line. These riotous gestures are rendered in Martinez’s colour palette, primary colours that appear cheerful, artificial, sometimes sludgy.

This peculiar dynamic explodes traditional ideas of what a still-life can be where traditional opulence is cut with the grime of urban life, giving Martinez’s work freedom from the orthodoxy of post-war American painting. Elements of Abstract and Neo-Expressionism are borrowed by Martinez, examined, employed and made resolutely his, distanced from the source by his characteristic gesture. These allusions are muddled with repetition and graffiti-like tags, marks which are highly personalised but also ubiquitous, giving a sense of comic-book familiarity.

The volatile mixture of materials and their paradoxical application retain the energy of the doodle in the speed of their visual immediacy; a directness which stems from Martinez’s personal challenge to link drawing and painting.
Press Release PDF View Artist