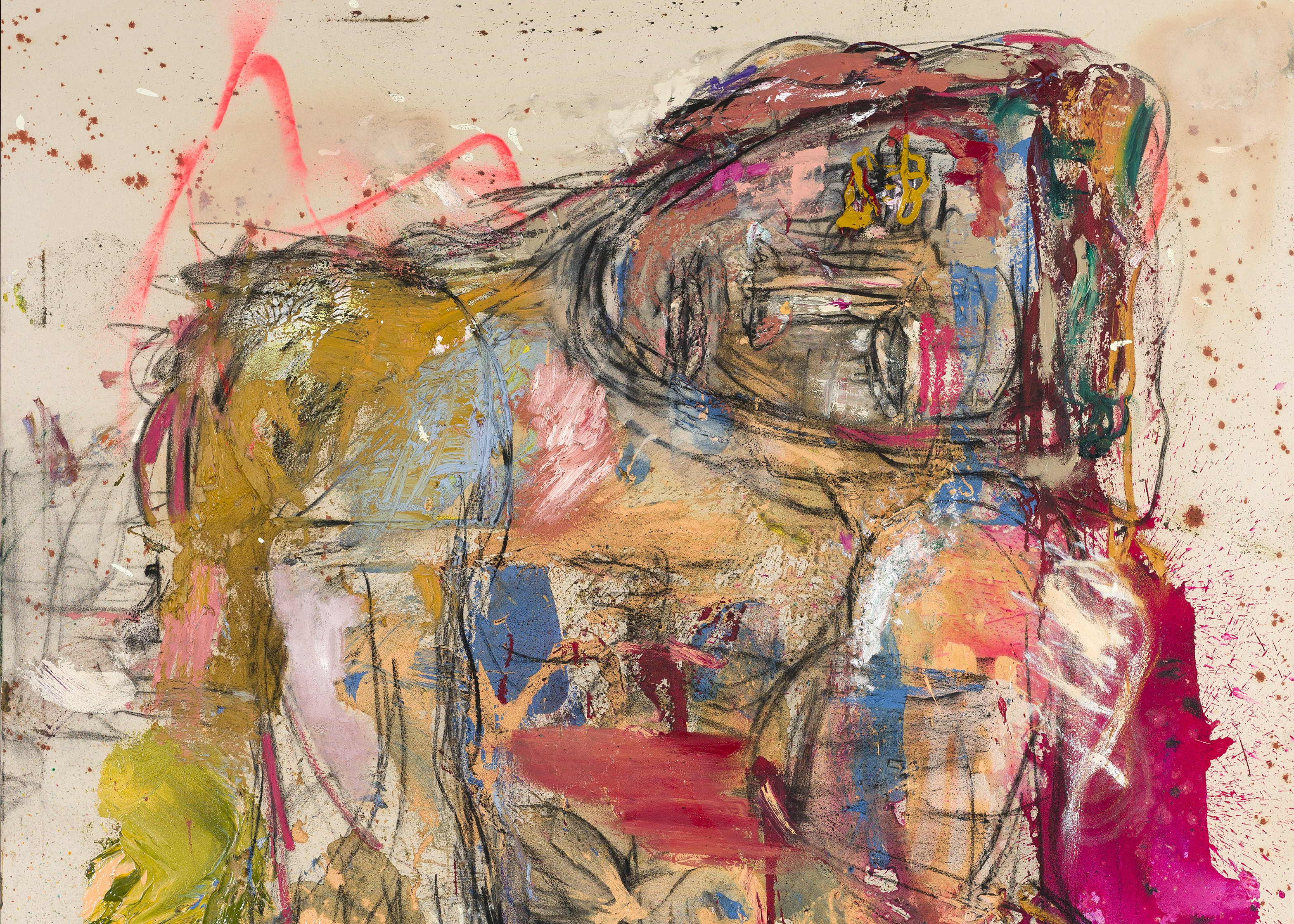 Timothy Taylor is delighted to announce a solo presentation of twelve paintings and studies by British artist Daniel Crews-Chubb for the Armory Show 2022, highlighting an important new series of work, the Immortals paintings, seen here for the first time. This solo presentation precedes two major museum exhibitions of which Crews-Chubb will be the subject: a two-person exhibition at The Ashmolean Museum, Oxford with Flora Yukhnovitch in autumn 2023; and a solo exhibition at the Long Museum, Shanghai in November 2024.

In the past year, Crews-Chubb has distilled his layered and heavily-impastoed style to a more minimal painterly language of slanted brushstrokes against negative space. The Immortals series (2022-present) sees the godlike creatures Crews-Chubb has explored over the last five years in vivid and increasingly controlled studies and paintings. Teal, rose and highlighter-yellow paint are thinly stained across gritty cream-colored surfaces, embodying the balance between ‘chaos and control’ that Crews-Chubb seeks to express.

Going beyond our earthly limits is a subject that has long fascinated the artist. His figures’ flattened heads and exaggerated hands and feet recall the skewed bodies of portraits by Willem de Kooning and late Pablo Picasso. Yet their twisted postures are decisively alien: inspired not only by pre-Colombian stone statues of tribal gods, but also humans engaged in pushing their bodies to the limits, such as contortionists, warriors and samurais.

The bulky bodies of Crews-Chubb’s figures echo the ceremonial metal armour of Japanese emperors, which Crews-Chubb observed closely in the British Museum. In the Japanese Shinto religion, it was believed that kami or ancestral spirits continued to live in the possessions of the deceased after their death – particularly a warrior’s sword and armour. Like the bright spots of paint in Crews-Chubb’s work, armour was often intricately ornamented with gold, lacquer, horns and fur to create frightening yet beautiful effects, physically manifesting the soul of the samurai.

The series’ title is derived from Crews-Chubb’s interest in powerful ancient leaders’ attempts to preserve themselves from death in various ways – from portraits and currency memorializing kings and queens to cults based around religious prophets. ‘Immortality is our most eternal desire,’ Crews-Chubb explains of the theme. ‘It never goes away. To depict something in paint is to immortalise that subject, giving it a life beyond our own.’

Crews-Chubb plays with the friction between abstraction and figuration, contrasting tense anatomical outlines in charcoal with rivulets of freshly poured neon-pink paint that suggest a body in motion. In the artist’s eyes, the conflict between abstraction and figuration in this series speaks to a fundamental human need: to impose order on unexplained events. ‘Pareidolia inspired this series – the concept of humans trying to ascribe significance to abstract patterns,’ he explains. ‘What you see in coincidence depends on your beliefs. Spiritual people might find a religious significance in passing clouds. But I realized that this is exactly what we do in our search for meaning behind abstraction.’