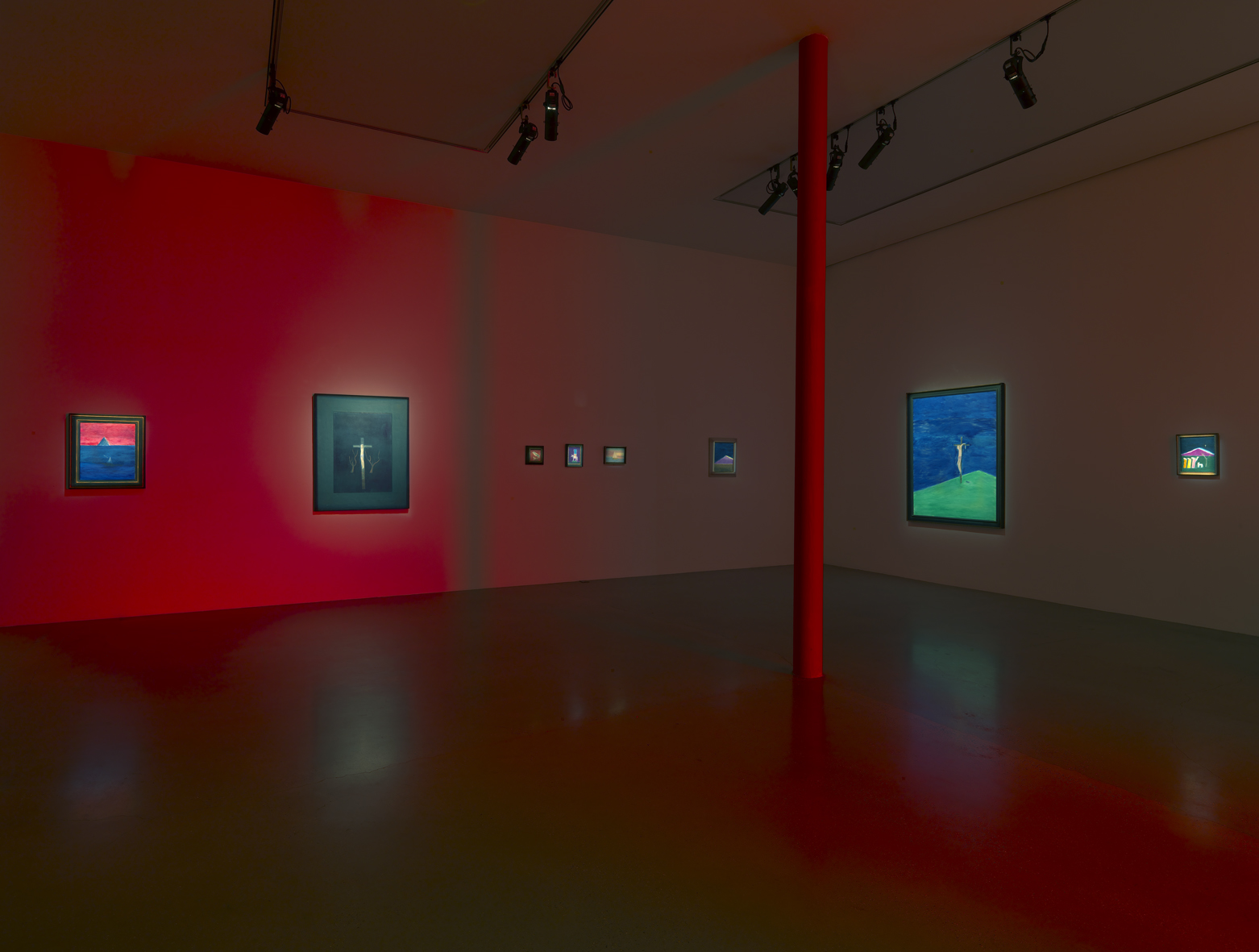 In a career spanning over 5 decades, Aitchison was known and admired for the Mediterranean intensity of his palette, his flat, almost two-dimensional forms and his simple icon-like compositions. His distinctive subject matter consists of still lifes, landscapes, portraits, nudes, Bedlington terriers and sheep, as well as crucifixions, all rendered in vibrant, luminous colour, invoking both the early Italian Renaissance as well as the British visionary tradition.

This is the first exhibition of Aitchison’s paintings in London since his death in 2009. The works in the show, a few of which have not been exhibited for many years, have been selected by Terry Danziger Miles, executor to The Estate of Craigie Aitchison.

Compassion, humility and poetry are the unifying features in all of Aitchison’s pared-down works; few artists have been able to express feelings of tenderness, longing and pathos so successfully. As John McEwan has written, “Aitchison was one of the subtlest, most original and purist artistic spirits of his time”.

Crucifixion I, 1991, is a masterful example of how Aitchison combined religious subject matter with a modern sensibility. Stark simplicity is the key: the large canvas is boldly divided into two vivid sections – a blood red sky and a brown ground create Rothkoesque tones. The pale and stylised Christ figure, recalling the elegance of the early Italian primitives, both dissects and unites these sections, while a golden thread links the crucifix with a heaven like single beam of light. Amongst this richness of colour, Aitchison inserts a subtle note of blue in the form of a bird, symbolising the Holy Ghost, which hovers close the dying Christ.

Other favourite themes explored in the exhibition include Aitchison’s attachment to still lifes composed of humble objects: souvenirs, knick knacks and ornaments. These unloved and sometimes broken objects are often suffused with a hint of melancholy – such as the solitary figure in Beirut Figurine, 2006, which stands against a hauntingly delicate washed blue wall. In Washing Line at Sunset, 2004, the hanging socks, trousers and other elements take on an existential and even elegiac quality. Meanwhile, Aitchison’s landscapes, such as Isle of Arran from the Mainland, 2008, have a starkly expressive quality that perfectly captures the awe felt by the artist faced with a majestic natural world.

Craigie Aitchison was born in Edinburgh in 1926. He became active on the bohemian London art scene in the 1950s and studied at the Slade School of Art alongside Michael Andrews, Victor Willing, Myles Murphy and Euan Uglow. Aitchison’s first solo exhibition was held in 1959 at the Beaux Art Gallery, owned by legenadary art dealer Helen Lassore (coincidentally, this site in Bruton Place was Timothy Taylor Gallery’s first space). He exhibited extensively throughout his career and in 1988 was elected a Royal Academician. In 1994, Aitchison won the inaugural Jerwood Painting Prize and was awarded a CBE for his contribution to British Art in 1999. A major retrospective of Aitchison’s work was held at the Royal Academy in 2003. Cragie Aitchison died in London in 2009 at the age of 83.

In January 2012, Bloomsbury auctions held a highly successful sale of Aitchison’s effects including many of the studio objects which featured in his paintings.

This summer 2012, The Craigie Aitchison Memorial Window, based on one of Aitchison’s crucifixion paintings will be unveiled by the Bishop of London at St Mary the Boltons in Chelsea. The window features handblown glass from Glasshutte Lamberts in Bavaria and has been fabricated by Neil Phillips of Pugin, Hardman and Powell.

Note to editors:
Terry Danziger Miles is an executor to the Estate of Craigie Aitchsion and is a partner at Timothy Taylor Gallery. Danziger Miles began his career in the art world in 1960 at Marlborough Gallery in London where he worked with artists such as Francis Bacon, Lucian Freud and Frank Auerbach.